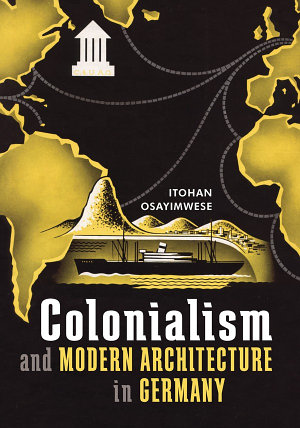 Over the course of the nineteenth century, drastic social and political changes, technological innovations, and exposure to non-Western cultures affected Germany’s built environment in profound ways. The economic challenges of Germany’s colonial project forced architects designing for the colonies to abandon a centuries-long, highly ornamental architectural style in favor of structural technologies and building materials that catered to the local contexts of its remote colonies, such as prefabricated systems. As German architects gathered information about the regions under their influence in Africa, Asia, and the Pacific—during expeditions, at international exhibitions, and from colonial entrepreneurs and officials—they published their findings in books and articles and organized lectures and exhibits that stimulated progressive architectural thinking and shaped the emerging modern language of architecture within Germany itself. Offering in-depth interpretations across the fields of architectural history and postcolonial studies, Itohan Osayimwese considers the effects of colonialism, travel, and globalization on the development of modern architecture in Germany from the 1850s until the 1930s. Since architectural developments in nineteenth-century Germany are typically understood as crucial to the evolution of architecture worldwide in the twentieth century, this book globalizes the history of modern architecture at its founding moment.