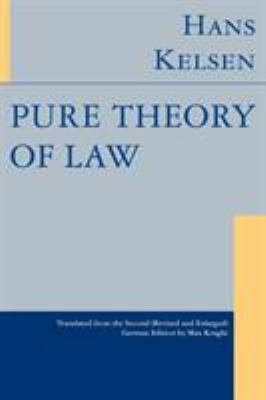 Kelsen, Hans. Pure Theory of Law. Translation from the Second German Edition by Max Knight. Berkeley: University of California Press, 1967. x, 356 pp. Reprinted 2005 by The Lawbook Exchange, Ltd. ISBN 1-58477-578-5. Paperbound. $36.95 * Second revised and enlarged edition, a complete revision of the first edition published in 1934. A landmark in the development of modern jurisprudence, the pure theory of law defines law as a system of coercive norms created by the state that rests on the validity of a generally accepted Grundnorm, or basic norm, such as the supremacy of the Constitution. Entirely self-supporting, it rejects any concept derived from metaphysics, politics, ethics, sociology, or the natural sciences. Beginning with the medieval reception of Roman law, traditional jurisprudence has maintained a dual system of "subjective" law (the rights of a person) and "objective" law (the system of norms). Throughout history this dualism has been a useful tool for putting the law in the service of politics, especially by rulers or dominant political parties. The pure theory of law destroys this dualism by replacing it with a unitary system of objective positive law that is insulated from political manipulation. Possibly the most influential jurisprudent of the twentieth century, Hans Kelsen [1881-1973] was legal adviser to Austria's last emperor and its first republican government, the founder and permanent advisor of the Supreme Constitutional Court of Austria, and the author of Austria's Constitution, which was enacted in 1920, abolished during the Anschluss, and restored in 1945. The author of more than forty books on law and legal philosophy, he is best known for this work and General Theory of Law and State. Also active as a teacher in Europe and the United States, he was Dean of the Law Faculty of the University of Vienna and taught at the universities of Cologne and Prague, the Institute of International Studies in Geneva, Harvard, Wellesley, the University of California at Berkeley, and the Naval War College.Also available in cloth. 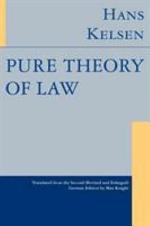 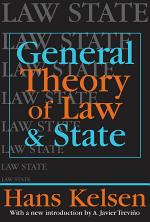 General Theory of Law and State

Authors: Hans Kelsen
Categories: Social Science
Widely regarded as the most important legal theorist of the twentieth century, Hans Kelsen is best known for his formulation of the "pure theory of law", - within which the study of international law was his special field of work. The present volume, "General Theory of Law and State", first
Language: en
Pages: 376

Legality and Legitimacy in Hans Kelsen's Pure Theory of Law

Authors: Lars Vinx
Categories: Legal positivism
Positivist legal theorists inspired by Kelsen's work failed to appreciate the political-theoretical potential of the Pure Theory of Law and thus turned to a narrow agnosticism about the functions of law. The Pure Theory of Law, I conclude, may offer a paradigm of jurisprudential thought that could reconnect jurisprudence with 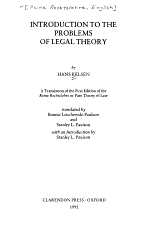 Introduction to the Problems of Legal Theory

Authors: Hans Kelsen
Categories: Social Science
Hans Kelsen is considered to be one of the foremost legal theorists and philosophers of the twentieth century. His writing made significant contributions to many areas, especially those of legal theory and international law. Over a number of decades, he developed an important legal theorywhich found its first complete exposition 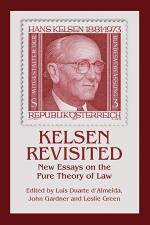 Authors: Luís Duarte d'Almeida, John Gardner, Leslie Green
Categories: Law
Forty years after his death, Hans Kelsen (1881-1973) remains one of the most discussed and influential legal philosophers of our time. This collection of new essays takes Kelsen's Pure Theory of Law as a stimulus, aiming to move forward the debate on several central issues in contemporary jurisprudence. The essays