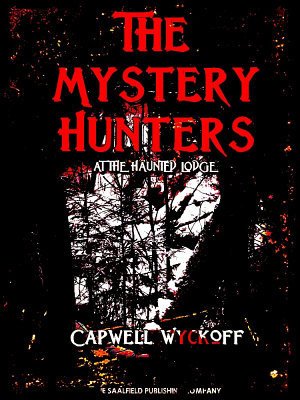 Example in this ebook CHAPTER I The Mystery Hunters The High School at Cloverfield was quiet as the hands of the clock approached the three-o’clock hour. Then a gong pealed out and the building became a very beehive of sound. The thump of many feet and the hum of voices was heard. Healthy, wholesome young boys and girls poured out of the side doors and swarmed over the campus. Overcoats were pulled tighter as the nip of the keen Vermont air was encountered. Two boys had come out together, and they paused to wait for two others. The boy with the clean-cut, manly face and the sparkling eyes was Barry Garrison, an outstanding boy in the Cloverfield High School. He had been the right halfback on the school team this year and had helped to lead it to a glorious record of no defeats and first place on the Conference list. He was an all-around athlete and stood well in his senior-year studies. Although Barry Garrison would have turned the idea aside with a good-natured laugh, he was the most popular boy in the high school. His lifelong chum was Kent Marple. Kent’s father owned the local hotel, and the boy had enjoyed many advantages in life. He and Barry had been friends ever since they had been small boys. Young Marple was broader than Barry, with a heavy shock of black hair and a chin that was a trifle determined. He had played fullback on the football team during the past season. These two boys did not seem to be in any hurry. Barry leaned against a maple tree and whistled softly, while Kent glanced from one side door of the school to the other. “The twins must have been kept in,” Barry observed. “Maybe they are clapping erasers for the teacher,” Kent grinned. “If they are, they’ll clap ’em clean,” Barry laughed. “The Ford twins always finish what they start. Here they come now.” Two boys came springing down the steps of the school building and looked around for Barry and Kent. When they had seen their particular friends, one of them waved, and then both boys dashed across the hard ground toward the boys under the trees. At first glance there was little to distinguish between Mac and Tim Ford. They were both the same height and build, stocky young fellows who had made splendid ends on the team. But at closer range some differences were apparent. Mac was sandy-haired, and Tim was gifted with a light brown mass of hair that sometimes managed to stay combed. Both boys had attractive, lively countenances and were well liked by everyone in the small town. They were often the leaders in the fun and could always be counted on to join in any kind of a lark. With Kent and Barry, they made up a quartet that was widely known. Mac Ford beat his brother to the maple tree by a yard. “Thought we never would get out,” he panted. “Took Tim’s advice in a problem, and it was wrong. Had to do it over.” “The trouble is that you didn’t take my advice,” Tim denied. “I tried to show you how to work it, but——” “Never mind,” Barry interposed, thrusting his hands deep into his sweater pockets. “Let’s move along. It’s cold today.” “It ought to be,” Kent observed. “Christmas is almost here.” Two high-school boys and a girl passed them and nodded and smiled. “There they go,” the girl cried. “The mystery hunters!” “Four Sherlocks, the locker-room detectives!” chimed in one of the boys. When this trio had passed on, the four chums looked at one another. “They seem to keep calling us the mystery hunters,” Barry smiled. “Just because we found out who was stealing things out of the lockers,” grunted Tim. “That wasn’t such a big job.” “Anybody could have done it, if he had taken the trouble to,” Kent said. “The biggest surprise about the whole thing was the fact that a boy like Carter Wolf was doing it,” Mac put in. To be continue in this ebook 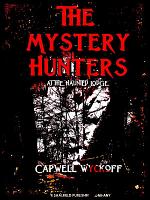 The Mystery Hunters at the Haunted Lodge

Authors: Capwell Wyckoff
Categories:
Example in this ebook CHAPTER I The Mystery Hunters The High School at Cloverfield was quiet as the hands of the clock approached the three-o’clock hour. Then a gong pealed out and the building became a very beehive of sound. The thump of many feet and the hum of voices
Language: en
Pages: 140

The Mystery Hunters at the Haunted Lodge 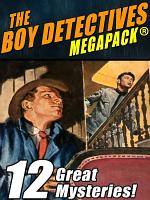 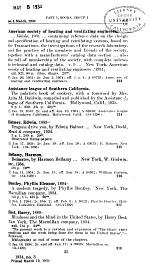